this is the most complex party we've planned yet -- we were inspired, and we had a reasonable amount of time to turn inspiration into reality.

roo's interest in the world is growing steadily as she realizes that a number of our friends from KL have dispersed into various parts of the globe. her 'boyfriend' who is vietnamese-canadian, is now living in the middle east. japanese friends have moved back to tokyo. recently, she was a flower girl at a wedding that introduced her to an international contingent of asians, europeans, and americans. she's also none-too-pleased with my own travels and has been asking what i've been upto.

so on the ipad, we would look at maps, and flags, and would get familiar with other languages. (she watches barbie in german, though i have no idea whether she's really watching or just zoning out.) we wanted to share our curiosity about the world through a simulated travel-around-the-world adventure. once we completed the logo design and confirmed the countries we wanted to visit, all the other details just sort of rippled off.
invitation cards were boarding passes. to make the experience as authentic as possible, we also created a passport, which came with a simple language kit for all the countries in our itinerary. we assigned a very lovely friend of ours to be the immigration officer, and she had a bag of country stickers which roo and her friends can stick onto their passports once they complete the required task. 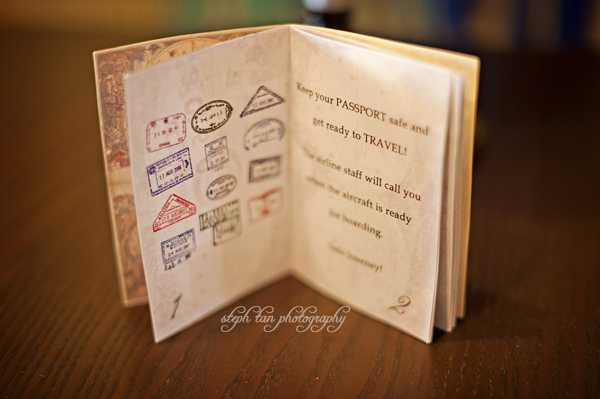 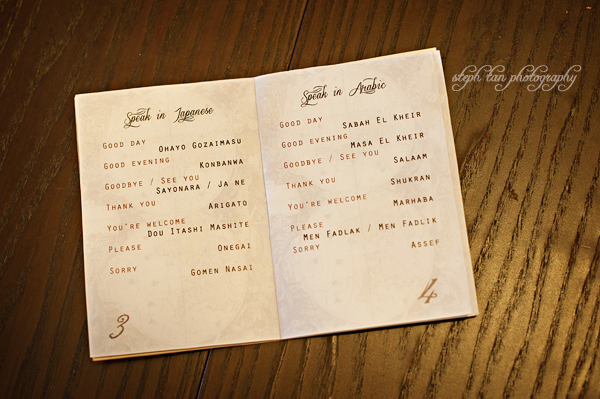 for the decorations, we kept it as simple as we could. we printed a large pacific-centric world map on regular A4 paper and pieced it together using glue. it was literally a 36-piece puzzle we had to sort.  we chose this map because Asia's right smack in the middle, which is a good way to look at the world now. 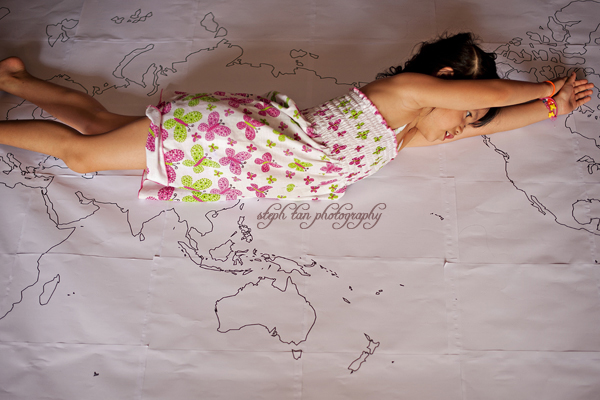 once that was done, we spent an afternoon just painting. roo was very enthusiastic at first. later on, she kept complaining how big china is. i gave her the pacific ocean after that, and she begged me to give her something simple like australia. some ants died in europe while we were finishing off the painting. i'm quite proud of roo's dedication as we were painting the map. this world is mostly painted by her. 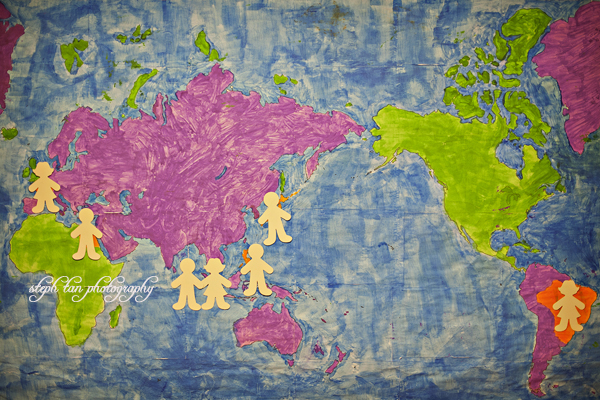 our home walls are coffee-coloured so we needed a little something to add more 'life' to the party. as a backdrop for the table, roo cut up crepe paper of the rainbow variety into strips. we draped it over twine to serve as a curtain of streamers. 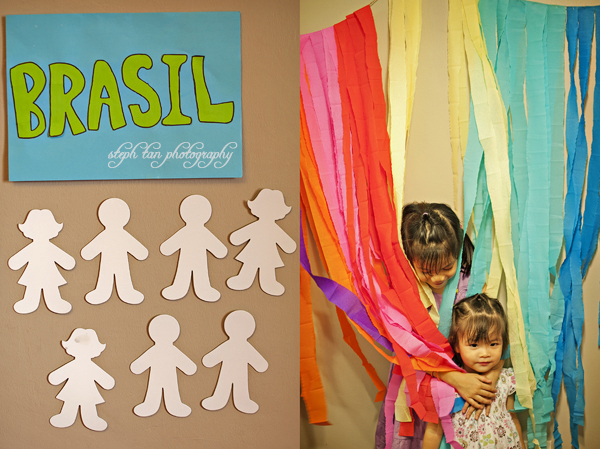 in one corner table, we put together some books about the world into a mini-library for friends. (reference area for parents who might get grilled with questions by their little ones...) 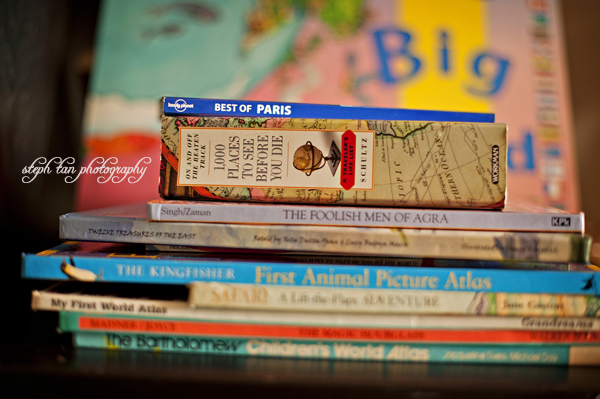 one of the things i was personally most excited about was the cake. a friend of mine recommended debbie of sweetyendings, and upon reading her blog and seeing her cake from this party, i was convinced we found the best woman for our cake idea: a vintage luggage bag decorated with travel stickers. 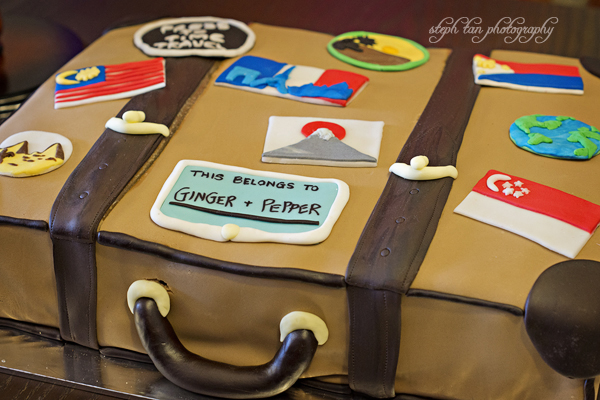 debbie blogs about how she created the cake here, and it's such a cool thing to know the behind-the-scenes story of our cake. :) 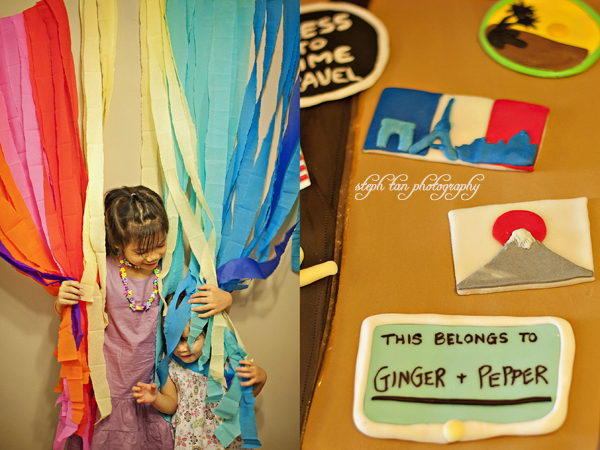 last but not the least, we prepared a travel kit for our friends which served as pretty little goodie bags. perhaps as a hint to what the little ones did during the party, our travel kip included a couple of nibbles, a bottle of water, a hieroglyphs guide, a sushi mat, a small bottle of glue, and a couple of piles of rainbow-colored lolly sticks. 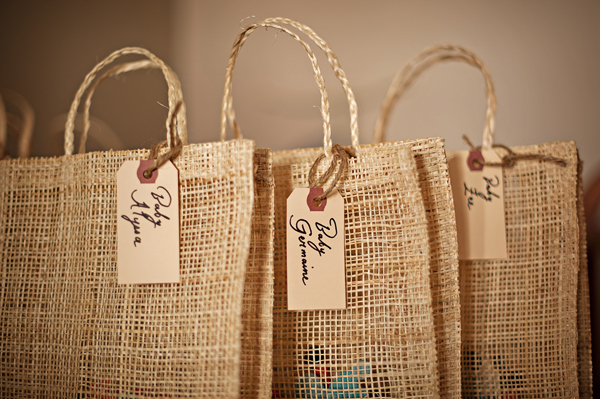 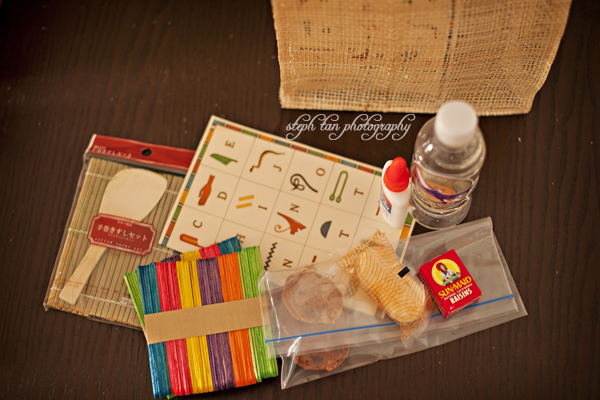 we love how all the elements are in sync, though we didn't really stick to a specific color scheme. there are so many different ways to stretch this idea -- and what i love about it is that there's plenty more of the world to explore. 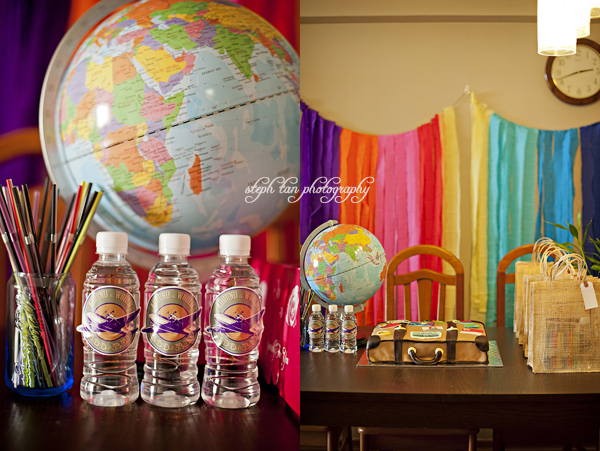 Oh I love parties and yours was really a treat to look at. That map is lovely and I love that she worked hard at painting it. and haha, I was wondering where I had seen that cake before :) Realised later it was probably on Debbie's facebook page. Can't wait for the next post.

I love this party theme! Looks like so much fun! :)

Wow! Loved all the little details you've added for the party! And a big round applause for roo being able to paint that huge map!