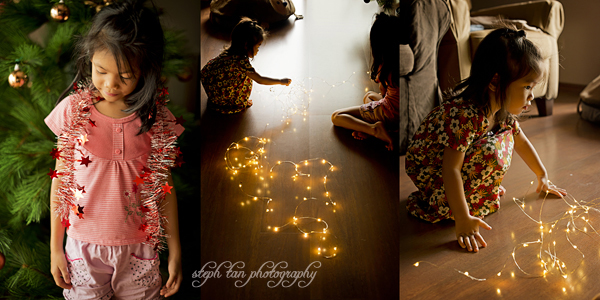 i've always struggled with an appropriate celebration of christmas. coming from a muslim family, educated in catholic schools, and innately curious and widely exposed to other religions, i grew up pretty mixed about religious celebrations. nonetheless, it is reason enough to enjoy the people we see on a daily basis but are too busy to truly appreciate, and to reconnect with folks who are a little farther, and perhaps a little scarcer. 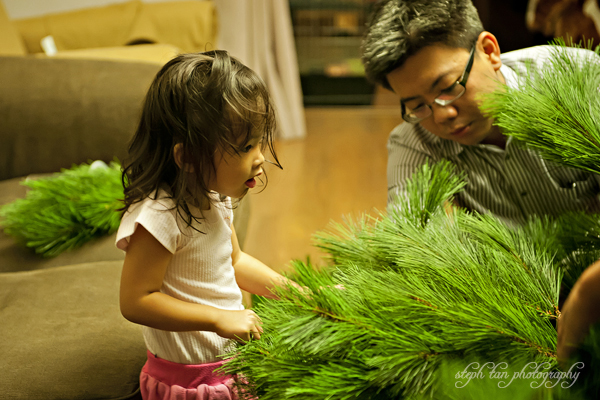 as we do every year, we try to get the little ones involved in setting up the tree. H takes the helm here, as i shoot along. 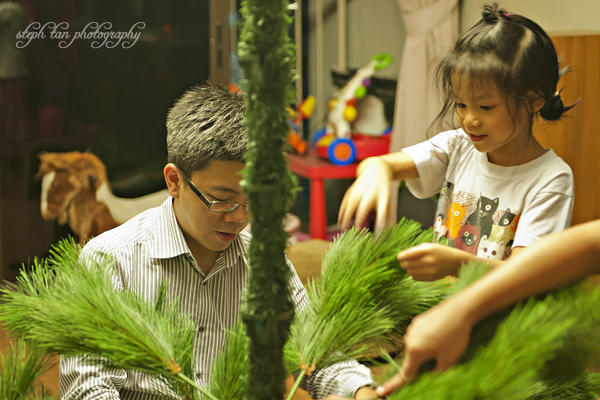 we did manage to start a modified 'advent calendar' tradition, which i hope we can sustain -- with inspiration from toddibox (more on that later). after settling down from travels, i wanted to create a space for fun learning for the little ones. 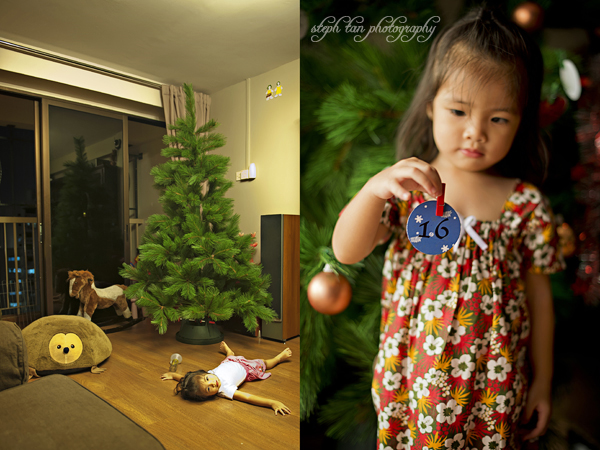 using the number cut-outs and pins from the toddibox kit, we counted up to christmas day. before the little ones could hang the numbers onto the tree though, they had to "complete a mission" first. the countdown is a good way to highlight specific values through activities -- and i'm glad the little ones were cooperative throughout.

among the missions they accomplished were to set aside toys/games they would like to give to someone else, and playing the games ourselves for one last time. i wanted the kids involved in selecting what to give away, to help them understand the value of what they give and what they keep. we decorated a paper christmas tree, wrote a letter to a friend, and behaved well with ah kong and ah mah while mommy and daddy were away on a weekend trip. the behaving bit earned them 3 days of pinning credits. to be honest, most of the tasks had to be performed by roo, while red obliviously milled about and waited for her turn to pin the tree. 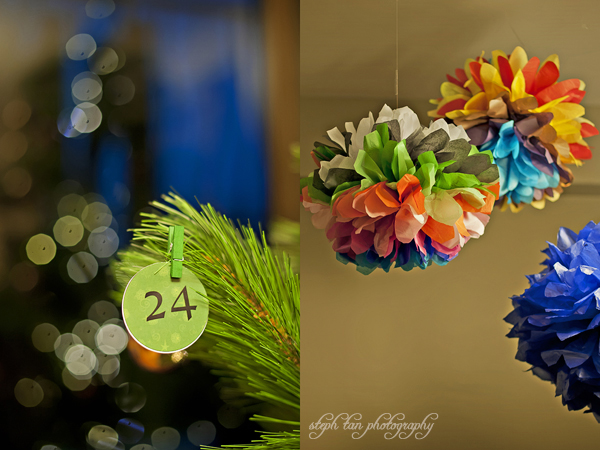 the day before christmas, we spent the afternoon creating tissue paper pom poms for a cousin's birthday party later in the month. roo loves crafting for others, and was eagerly asking me when ah kong's birthday is and if he needed any decorations for his party. ;) fluffing up the pom poms proved to be a delicate challenge. i think these are fairly decent for first tries. 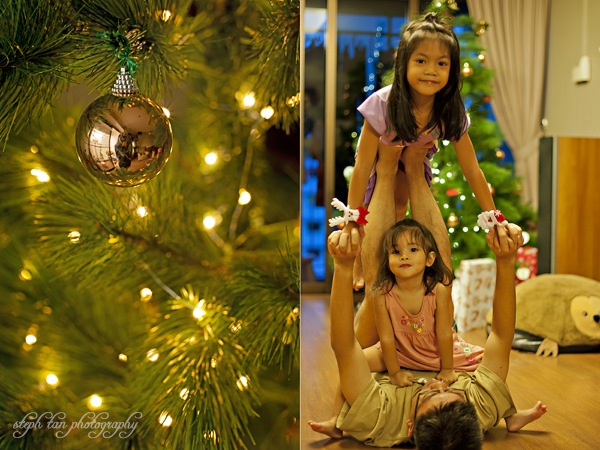 it's still strange to me how different my little ones are from myself. i can't help but expect them to like the same things i did as a child -- playing with fire, and lighting up random little explosives. they are a little bit more wary. perhaps they are born smarter... we lit up some candles as quiet thanksgiving for the past 12 months, and summoned roo's courage to hold a sparkler by herself. christmas morning, roo woke up early and couldn't wait to get started on identifying and unwrapping her gifts. it's a pleasant surprise that roo managed to wake red up without getting her grumpy. 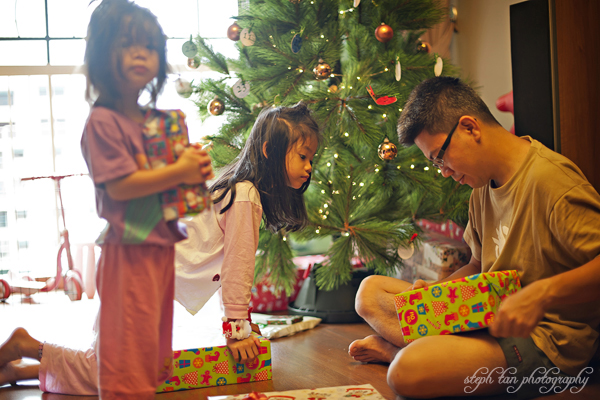 roo's fervent request: a remote controlled lady bug named 'sophie' that cleans up her orbeez. clean up is part of play -- and in this case, clean-up is the play. happy to know that my indoctrination is working on them. grin. i had some fun playing with 'sophie' too. 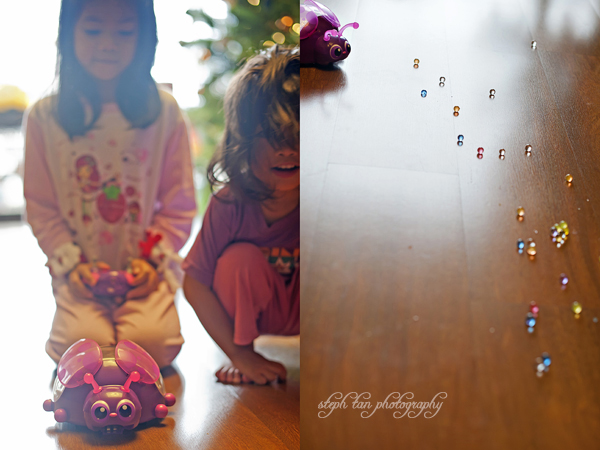 red is a foot stomping, headbanging singer who loves to dance, and she got to raid a bit more space in the living room with her piano. the mic is eternally soaked with saliva. 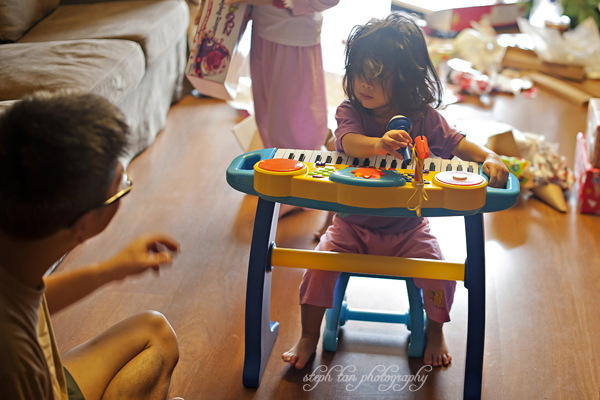 simple treats for the santas and santerinas.... 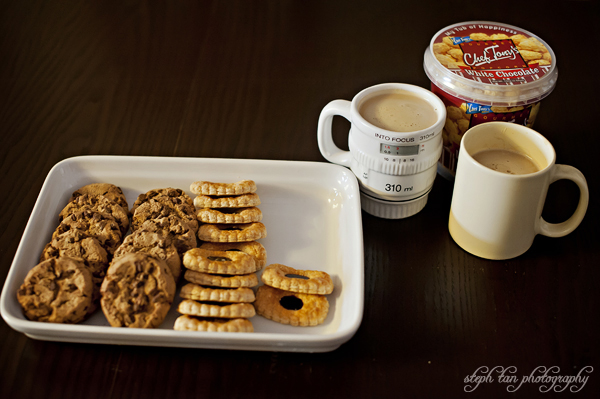 to pin the '25' on the tree, we needed to deliver gifts to the grandparents and cousins. they don't really celebrate it, but it was still nice to spread some 'cheer' and hang out with family. 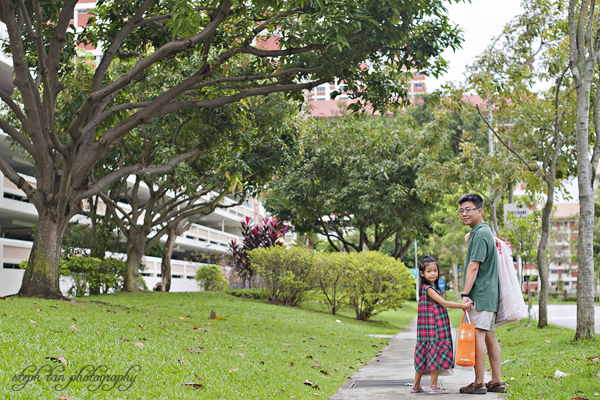 we also managed to kidnap cousin T for christmas! :) 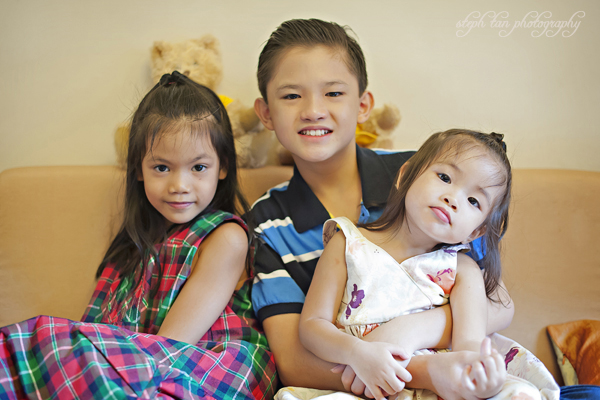 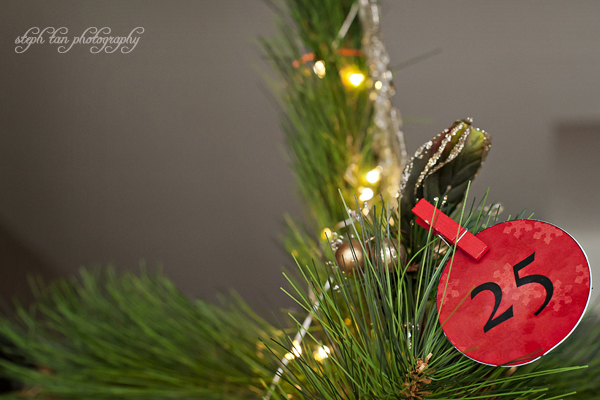 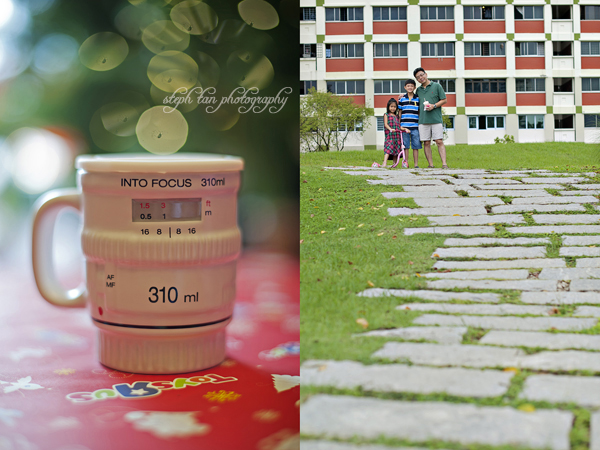 taking advantage of the cloudy but dry day, we headed off to the park for lunch and a free play exploration. i just love bishan park! 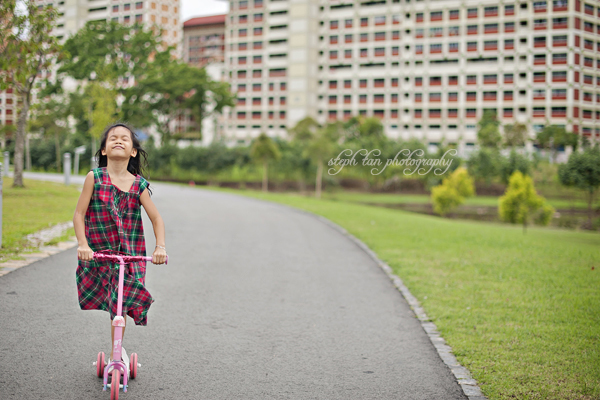 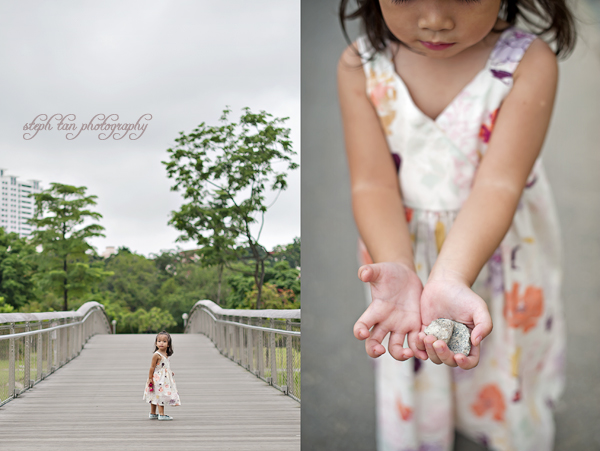 roo scooted along, T explored the river, while red picked up rocks and tried to create a totem pole out of them. simple joys. 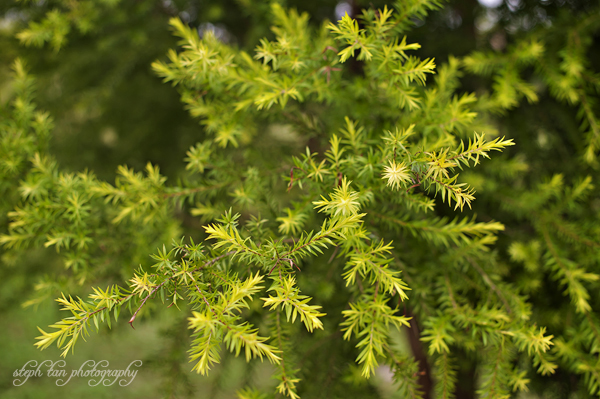 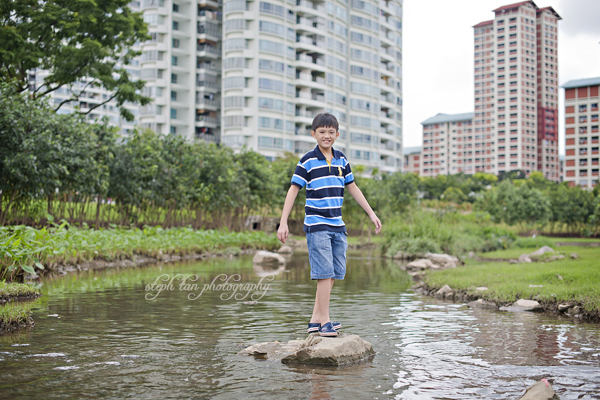 quite horrified that people treat beautiful spaces like this no better than a garbage dump. sadly, based on what we've seen, it's the adults who make this sort of mess. the kids we meet know so much better. 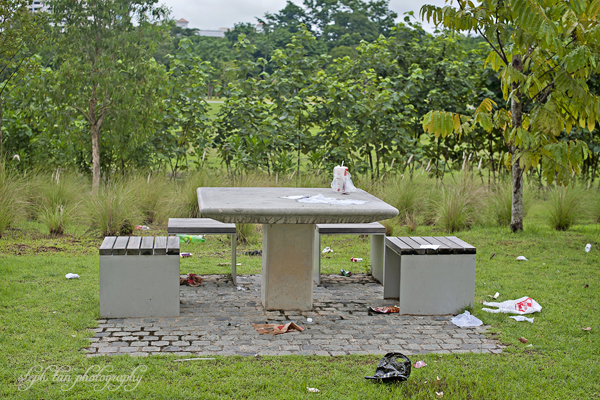 back at home, i was surprised to find the little ones still bubbling with energy. H led a nerf war against T who was armed with an automatic weapon (20 bullets in rapid fire succession). i kind of enjoyed watching H get bombarded by bullets. :) 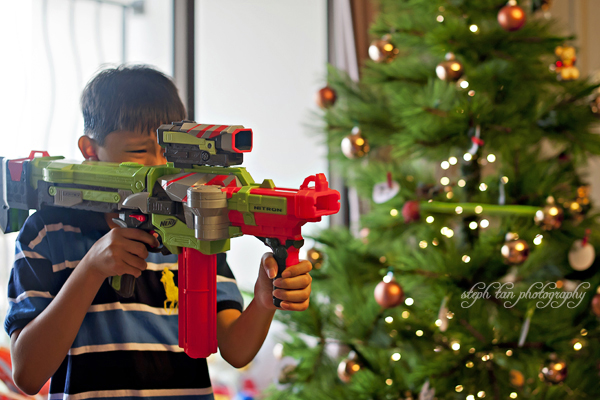 red joined in on the fun, walking confidently across the two camps and commanding everyone not to shoot her. she goes up to her target and tries to shoot them at close range, though she always misses. if she weren't so ineffective, i think the gang would have tried to shoot her too. 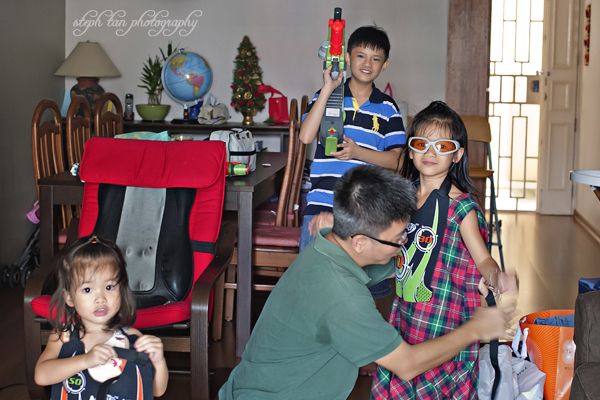 in classic roo style, she hid for the most part. and only shot when she felt she had the advantage i.e. whenever T has to scrounge for bullets. 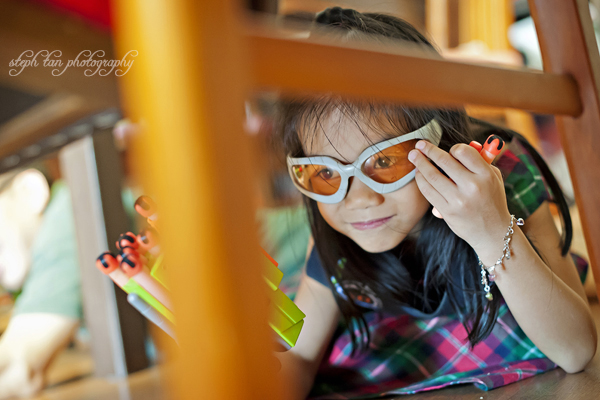 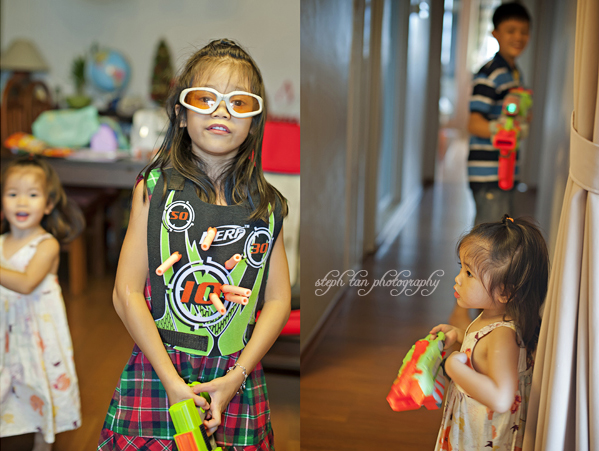 topped off the day by lounging and watching movies at home. just a day to celebrate each other, and the relationships that we hold close. i hope this continues a tradition of togetherness for the little ones -- of being with the people we're with, no distractions. 'be where you are' and it seems only right i give my special ones 100% when i can, especially on a day like this. 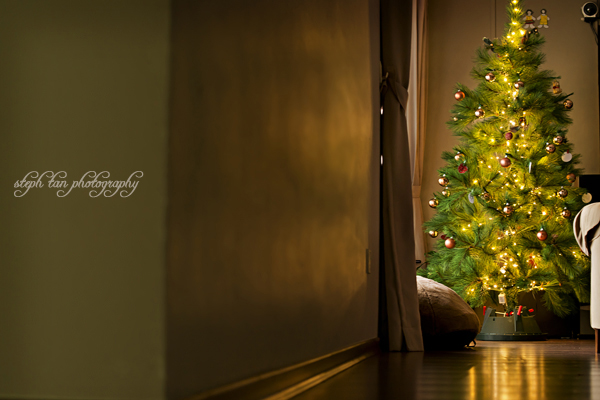 wishing everyone meaningful holidays! :)
by libpuritan

The girls are at their gorgeous best, as usual - and Mummy's last pic leaves me speechless.

Beautiful! Love your simple family Christmas. Was just thinking how short little Red's hair was in your header, and how long Roo's hair has grown since we last met!!

I love your requirements for hanging up the numbers on the tree. Shall dothat next year!!!! Happy holidays, Steph