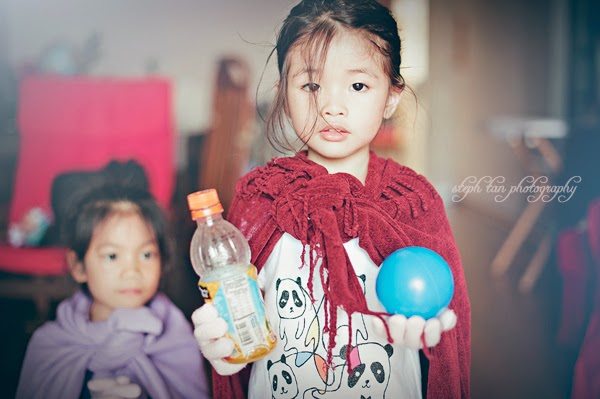 The Frozen Fever still hasn't died down. Here's a snap of Princess Red's coronation, with gloves, a blanket/cape, and her makeshift orb and sceptre. The scene is completed with Princess Roo playing along as Anna in the background. :)

The whole family's a "Frozen" fan and not ashamed of it. I especially love the Sami yoik they started the film with, which brings back memories from the Arctic Circle. The girls love the songs, the sparkly cape, and the hair styles; and I'm trying to make sure they pick up more than the pinkish purple frilly things.
Sharing the Top 5 reasons why Frozen's our favorite animated movie for years to come:

1 - Hans is a great cautionary tale to remind the kids when they start dating. I can quote Elsa and Kristoff by saying "You can't marry a man you just met!" and I can expect the girls to nod their heads in agreement...even in their teenage years. :)

2 - As a parent, I love how Anna was quick to emphatize and defend her sister ("My sister's not a monster...It was an accident. She was scared. She didn't mean it. She didn't mean any of this!") and take responsibility and immediate action for the unexpected consquences of her actions ("Tonight was my fault. I pushed her, so I'm the one that needs to go after her...I'll bring her back and I'll make this right."). Oh, and she's polite too ("Bring me my horse, please.") Though their parents might have messed them up emotionally, I'm sure they were smiling down at Anna in the afterlife during this scene. This is my case study for my girls in dealing with each other.

3 - The sober "Love" advice from the trolls:

People make bad choices if they're mad or scared or stressed
But throw a little love their way, and you'll bring out their best.
True love brings out the best!"

4 - If you've heard the song as often as we have, you'll remember: "My soul is spiraling like frozen fractals all around..." (Red's favorite lines). The movie's gotten my little ones curious about what fractals are. Granted it's a challenge trying to explain fractals to a three year old, with a combination of Geometry, Science, and Art, we've (over)simplified it for now with the idea of never-ending repeating patterns. Here are great references in case your little ones have questions too (One-pager, Educator's Guide). Currently developing an activity with the kids to make their understanding more real.

5 - Iterations of "Let It Go" are all over the internet. My favorite version is "Let It Flow" which we sing to encourage Red to relax and truly let it go in the toilet, instead of her diapers. It buys us at least a few minutes of peace as Red sits comfortably in the potty, humming along.

I've got a few nitpicks on the film like, when the fjord was thawed, where did the boat they're standing on come from? But overall, I would have to agree with the kids that it's pretty awesome! Now, back to practicing how to tie Elsa hair (Tutorial here).

We love Frozen in our household too. Well, it is really just me and hubs. He would play it over and over again. Bub is still too young to understand the story.

Let it flow!!! Lol lol!!!
I love how the girls have picked opposite roles! In our house of course it's poppy who's Elsa and calla who's Anna. But I don't think calla knows. She's just happy to follow her sister and belt out "oh, go! Oh, go!" with her own cape and crown!